The term “3-month colics” refers to stomach pains which may be accompanied by strong gas. Often the children cry a lot and are restless. It seems as though digestion takes an awful lot of effort for the little body. The term is a bit misleading, because the problems can persist for different lengths of time, sometimes up to 8 months. The actual diagnosis of a “3-month colic” presupposes that the unappeasable crying occurs over at least 3 weeks for at least 2 days/week and persists for more than 2 hours/day (Möckel and Mitha 2009). 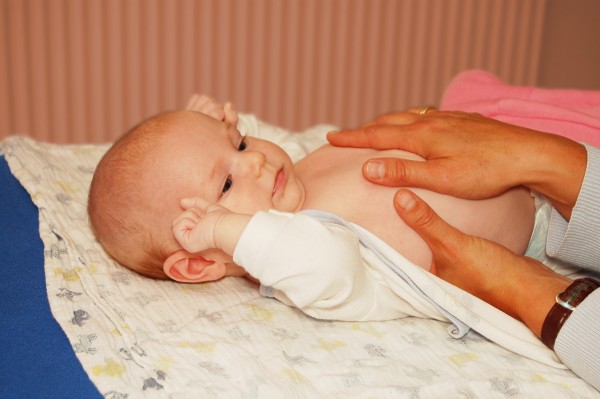 A variety of possible factors are discussed as the cause for this. Research seems to indicate that undigested lactose reaches the large intestine and ferments there, which results in the formation of gas (Marieb 1998; Möckel and Mitha 2009). Another possible cause could be a lack of secretion of lactate dehydrogenase (Miller 1991). The result is “air in the tummy”, high tension in the abdomen and gas. The children concerned are initially fairly quiet after a feed. Symptoms only occur, if the lactose that was not digested starts fermenting in the intestine – this process only starts about 90-120 minutes after a meal (Möckel und Mitha 2009).
A genetic disposition seems to also play a role (Liebmann 1981; Hogdall et al. 1991). Furthermore, stress seems to be an important factor that greatly promotes the occurrence of “3-month colics”: Prenatal stress (prior to birth), also stress of the pregnant mother before birth, e.g, in the form of psychological stress or taking medications can also affect the fetus and can no longer be buffered by the mother after a certain time. The child’s nervous system reacts with heightened irritability, which makes it more susceptible to colics (Möckel and Mitha 2009; Nathanielz 1999; Relier 1996).
Research has shown that stressed parents can lead to a worsening of colic symptoms (Wessel 1954; Forbes 1994; Möckel and Mitha 2009).

Often pediatricians prescribe drops or tablets that are supposed to help the desperate parents to deal with colics. Following is a short list of the most popular medications:
“BiGaia Drops” are a dietary food and are intended to provide special nutrition for digestive disorders, e.g., infant colics.
They contain a lactic acid bacteria called Lactobacillus reuteri Protectis, which was originally isolated from breast milk. It supports baby’s healthy intestinal flora. The drops contain neither lactose nor beta-lactoglobulin and are therefore a suitable component of a diet low in allergens (Martina Höfel, midwife). Our clinical experience has been that the drops support treatment very well, if there is a problem with the intestinal flora. However, if the cause does not lie in the intestinal flora, the drops have no effect. So far we have not seen a worsening of symptoms when BiGaia drops are given.
“Sab Simplex”, an anti-foaming agent, is often recommended alongside “Lefax.” The anti-foaming agents, however, have several ingredients which could trigger strong immune reactions in infants that have a respective disposition (e.g. an allergic family background). The development of allergies might be facilitated: raspberry and vanilla aroma, citric acid, and also various sweeteners. We have learned through experience in our clinic that there is no definite effect on the colics. In a few cases a positive effect can be observed, but often there is no effect. It cannot be excluded that the short-term effect can be traced back to the flavorings, which the child likes to taste, and which therefore distract it.
Our practical experience has shown us that even the toxic components of tap water, e.g., heavy metals and residues of drugs, can have a big effect on the digestive tract. Since children can also come into contact with this through breast milk if the mother drinks tap water, this can be a decisive factor that has an effect on the digestion.

3 – Month Colics from the Viewpoint of Osteopathy

An inflexible neck and head position can cause various muscle groups to be unbalanced, which leads to a weakening of the abdominal muscles, which in turn means that the intestine is lacking an abutment. The result is a decreased tone of the intestinal muscles as such and thus gas, which in turn puts pressure on the abdominal walls and pushes into baby’s hollow back (Biedermann 2007, Bloß 2013).
On top of this, some children might have problems with tightly closing their mouth, thereby swallowing more air and exacerbating a tendency to have gas. This is how 3-month colics develop (Biedermann 2007).
Stress during birth, like “failure to progress” or “getting stuck”, e.g., can result in compressions in the area of the skull. This can give rise to blockages or tensions:
It is highly probably that an inflexible skull base goes hand in hand with the symptom complex of crying, irritability and colics. What is meant by this is an increased density in the area of the skull base. Nevertheless, it must be emphasized that intestinal motility and function are initially still immature, which is why one cannot place all the blame for colics on an inflexible skull base. (Carreiro 2004).
An irritation of the head joints or tensions between the occipital and the temporal bones (skull bones) lead to a narrowing of the jugular foramen and therefore to an impairment of the structures that exit here. The jugular vein as well as the cranial nerves 9 (glossopharyngeal nerve), 10 (vagus nerve), and 11 (accessory nerve) pass through the jugular foramen. The sensitive structures which run through the jugular foramen as well as the hypoglossal nerve (12th cranial nerve) which traverses the hypoglossal canal, can be irritated by tensions in connective tissue, muscles, or cartilage components (Opalka 2008; Wildgruber 2012; Carreiro 2004; Meusel 2014).
Problems with sucking and swallowing can be the result of an irritated glossopharyngeal nerve.
Vegetative problems with hypertension in the gastro-intestinal tract and thus the functional problems of infants like hiccup, spewing, painful burping, problems with passing bowel motions, and gas, could be the result of an impaired vagus nerve (Opalka 2008; Wildgruber 2012; Carreiro 2004; Meusel 2014). The vagus nerve is a cranial nerve that provides function for the majority of our digestive tract. “Clinically the vagus nerve can be affected by lesions of the cervical vertebrae, the hyoid, the upper thoracic vertebrae, and the upper rips, as well as by muscle contractions in these regions and peripherally by foreign objects or diseases of the mucous membrane which coats the various cavities irritated by the vagus nerve.” (Clark 2005).
Our practical experience has shown that osteopathic treatment of the affected structures usually leads to a significant improvement of the symptoms.
)

Manage Cookie Consent
To provide the best experiences, we use technologies like cookies to store and/or access device information. Consenting to these technologies will allow us to process data such as browsing behavior or unique IDs on this site. Not consenting or withdrawing consent, may adversely affect certain features and functions.
Manage options Manage services Manage vendors Read more about these purposes
View preferences
{title} {title} {title}