“..early mornings are strangely silent where once they were filled with the beauty of bird song. The sudden silencing of the song birds, this obliteration of the color and beauty and interest they lend to our world have come about swiftly…” 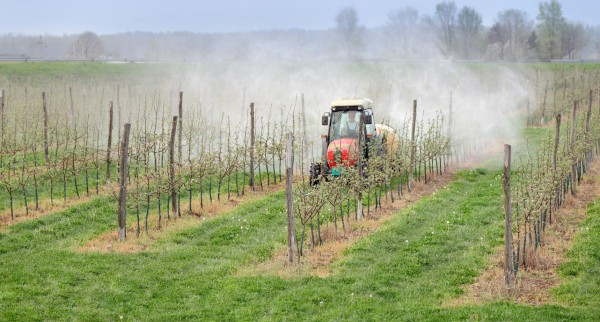 When Rachel Carson’s book was published in 1962, it triggered heated debates.
For the first time, both factually and poetically, the negative effects of uncontrolled use of pesticides were pointed out and in doing so, the scientific belief in progress as such was called into question.
America’s chemical giants embarked on a crusade of revenge with lawsuits and a $ 250,000 campaign. Although it took another ten years, finally, the use of DDT in farming was prohibited in the United States in 1972.
The book, which became a classic of the environmental movement, is as current today as it was then.

Today they are called imidacloprid, glyphosate, atrazine, or thimerosal etc. and their use is almost without limits: for mites, bacteria, and fungi, plants and roundworm, to prevent damage through wildlife, as a corrosive to treat seeds and seedlings, or to treat textiles and also mattresses.
Worldwide there are about 900 active ingredients that are approved for sale in 100,000 products.
Guarantors for unlimited growth and unlimited yield?
Or only for unlimited profits?

94% of our food is sourced from conventional farming with regular use of pesticides and artificial fertilizers. Every year around 40,000 tons of pesticidal agents are sprayed onto German fields alone.
The effects on people and their environment have been downplayed for far too long; and yet, they are devastating:
Reduction of biodiversity, damage to soil and plants, development of resistances that require for ever increasing dosages, contamination of groundwater and rivers, and the huge number of bee deaths that has been receiving a lot of attention in the media recently.

The health risks for people as the non-target organism are no less disastrous.

Every year millions of farm workers are poisoned when spreading the pesticides, sometimes by highly-toxic agents that have been banned here for a long time. Tens of thousands of these farm workers die.
Especially in developing countries, the users often don’t even have essential protective gear. Chemicals that are classified officially as carcinogenic, genetically harmful, or affecting fertility, are still in use globally.

In the end, the residues of these poisonous chemicals can be found on our dinner plates, in groundwater and drinking water, in carpets and mattresses, textiles and wood preservatives, and are therefore ubiquitous – with serious consequences.
Apart from acute poisoning, they cause chronic disease when taken up over a longer period.
Carcinogenic, genetically harmful, and hormonal effects as well as damages to the nervous and immune system are scientifically documented.

The controversial weed killer glyphosate has only recently been classified as “probably carcinogenic” by the WHO. This globally most frequently used herbicide allegedly also damages embryos and leads to hormonal problems, despite all the safety claims by the US-American manufacturer Monsanto.

The hormone-like effect of a number of other pesticides has been known for longer. It can lead to fertility problems or a heightened risk of breast cancer, affect behavior and intelligence as well as weaken the immune system.
The insecticide lindane has been prohibited for decades. It was an ingredient in wood preservatives and is suspected of triggering severe illnesses like cancer and Parkinson’s disease. It only decomposes very slowly and therefore even after 40 years high concentrations of lindane can be detected in room air and household dust. And: To this day, numerous buildings like day care centers, schools, and apartment blocks contain this dangerous substance.
Children are particularly susceptible to the effects of poisonous chemicals. Some pesticides can reach the fetus in the womb via the placenta and can also be transferred via breast milk to the nursing infant.
It can lead to impairment of mental development, motor skills, and behavior, mainly in the form of attention difficulties. Scientists are also talking about an increased risk of miscarriage and of various forms of childhood leukemia.

The poisonous effect of individual pesticides is predominantly tested on rats and mice, and then ‘converted’ and applied to people.
Threshold limits that may not be exceeded do exist; however, according to the opinion of critical toxicologists these are often too high – and on top of it, they are frequently exceeded.
The multiple stresses caused by so-called “pesticide cocktails” pose a big problem: In some food samples more than 20 different pesticides were detected. No combined effect has been tested so far: How they interact in the human organism is completely unknown; moreover, there are no maximum limits.

In order to protect oneself – to some extent at least – food grown organically remains the first choice.

Here, chemically-synthetic spraying agents are usually dispensed with and poisonous residues are the exception.
Depending on the country of origin, the number of pesticides used to treat fruit and vegetables can vary. The best thing is therefore to buy in season and from the region you live in.
In any event, however, fruit and vegetables should be thoroughly rinsed under lukewarm, running water.

Pesticides are also frequently used in the production of cotton, linen, wool, and silk.
Although to date there are no uniform and independent certification marks in the textile sector, manufacturer-independent quality labels that guarantee ecological and social criteria do exist:

We should pay particular attention to our “sleeping area.” Mattresses are frequently treated with thimerosal and highly toxic solvents like cyclohexanone, even natural materials like latex.
Thimerosal often causes a grain protein intolerance by blocking our digestive enzymes and solvents put a strain on our immune system as well as the vascular system.

Although marked improvements were achieved in the last few years through the commitment of organizations like Greenpeace or PAN (Pesticide Action Network), a fundamental change in global agriculture is not in sight.
In fact, the use of agricultural poisons in conventional farming is continually increasing. Much to the delight of the agrochemistry corporations.
The myth of unlimited growth seems to be true, at least as far as the profits are concerned.

I offer environmental-medical consultations in my practice. Residential toxins are frequently the cause of numerous pathologies, or play an important role. This includes migraine/headaches, immune deficiencies, infertility, and neuralgia, e.g., lumbago.
It is difficult to assess for a lay person whether such stresses and environmental pollution are relevant for their own symptoms or not.
Kinesiology in the context of integrative osteopathy is an effective method to diagnose environmental-medical stresses.

I use the following therapies for diagnosis and removal of insecticides and pesticides:

Manage Cookie Consent
To provide the best experiences, we use technologies like cookies to store and/or access device information. Consenting to these technologies will allow us to process data such as browsing behavior or unique IDs on this site. Not consenting or withdrawing consent, may adversely affect certain features and functions.
Manage options Manage services Manage vendors Read more about these purposes
View preferences
{title} {title} {title}